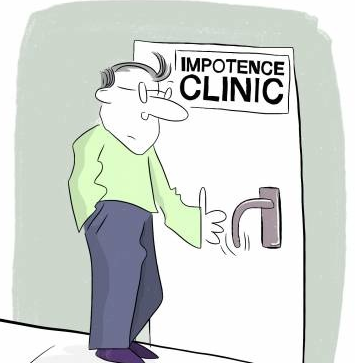 There are innumerable classic examples in the literature of maternal dominance contributing to secondary impotence. Thirteen such instances reflecting maternal dominance have been referred to the Foundation for therapy. Since the picture is so classic, a composite history can be provided to protect anonymity without destroying categorical effectiveness.

Maternal dominance primarily depreciates the young male’s security in his masculinity and destroys confidence in his socio cultural role-playing by eliminating or at least delimiting the possibility of a strong male image.

When the father is relegated to the role of second-class citizen within family structuring, the teenage boy has no male example with which to identify other than that of a devalued, shadowy, sometimes even ludicrous male allowed access to the home but obviously subject to control of the dominant maternal figure.

Mr. B, 34 years old
was referred with his wife for treatment of secondary impotence. He could remember little in family structuring other than a totally dominant mother making all decisions, large or small, controlling family pursestrings, and dictating, directing, and destroying his father with harsh sarcasm.

He remembered the paternal role only as that of an insufficient paycheck, and of a man sitting quietly in the corner of the living room reading the evening newspaper.

When he reached midteens, the parental representative at school functions was always the maternal figure, for both the young male and his younger sister (two siblings only). The same situation applied to church attendance and, eventually, to all social functions. The family matured with the concept that only three people mattered.

Masturbatory onset was in the early teens with a frequency of two or three times a week during the teenage years. As would be expected in a maternally dominated environment, dating opportunity for the boy was delayed, in this case until the senior year in high school.

Through college there were rare commitments to female interchange, all of them of a purely social vein. The young man was insecure in most social relationships, particularly those having orientation to the male sex.

He had been forbidden participation in athletics by his mother for fear of injury. He rarely pursued male companionship, feeling himself alternatively totally insecure in, or intellectually superior to, the male peer group.

Premarital sex in youth
Finishing college, the young man, particularly interested in actuarial work, joined an insurance firm. Although mainly withdrawn from social relationships, at age 28 he met and within three months married a 27 year old divorcee with a 2 year old daughter.

The divorcee, a dominant personality in her own right, was the mirror image of his mother. The two women were, of course, instant, bitter, and irrevocable enemies. The marriage, accomplished in spite of his mother’s vehement objections, was a weekend justice-of-the-peace affair.

The sexual experience of the courtship had been overwhelming to the physiologically and psychologically virginal male. The uninitiated man literally was seduced by the experienced woman, who manipulated, fellated, and coitally ejaculated him within three weeks of their initial meeting.

The hectic pace of the premarital sexual experience continued for the first 18 months of the marriage, with Mr. B awed by and made increasingly anxious by his wife’s sexual demands.

Intercourse occurred at least once a day. Following the pattern established during the courtship, opportunities, techniques, positions, procedures, durations, and recurrences, in fact, all sexual expression in the marriage, was at his wife’s able direction.

For the first year of the marriage the wife thoroughly enjoyed overwhelming her fully cooperative but naive and insecure husband with the force and frequency of her sexual demands. As the marriage continued unwavering in the intensity of her insistence upon sexual and social dominance, his confidence in his facility for sexual functioning began to wane.

He sought excuses to avoid coital connection, yet when cornered tried valiantly to respond to her demands. Finally, there were three occasions when sudden demand for coital connection forced failure of erection for the satiated male. Her comments were harsh and destructive, and the sarcasm struck a familiar chord.

The fourth time he failed to satisfy her immediate sexual needs, his wife’s denunciations reminded him specifically of his mother and of her verbal attacks on his father. For the first time in his life he identified with the man sitting in a corner of the living room reading the newspaper, and within a month’s time he had withdrawn to a similarly recessive behavioral patterning within his own home.

Successful erection
There is only one subsequent recorded episode of erection sufficiently successful for intromission with his wife. Aside from this, the man was totally impotent and had been so for three years when seen in therapy.

On an occasion when his wife was out of town, he followed the time-honored response pattern of the secondarily impotent man. There was attempted sex with a prostitute to see whether he could function effectively with any other woman.

For the first time in several months there was a full erection, but when he attempted to mount, the concept of his mother’s disapproval of his behavior disturbed his fantasy of female conquest. He immediately lost and could not recover the erection. This was his only attempt at extramarital sexual functioning.