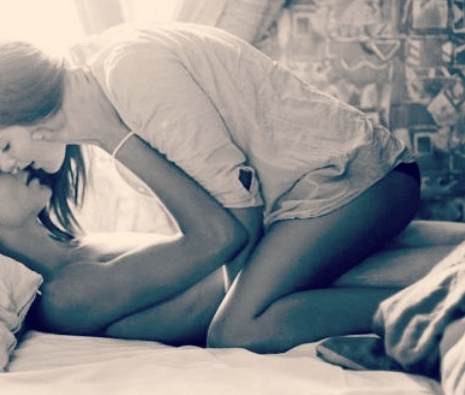 The husband has directed to place himself in a sitting (slightly reclining, if desired) position, with his back against a comfortable placement of pillows at the headboard of the bed. With the husband’s legs adequately separated to allow his wife to sit between them, she should recline with her back against his chest, pillowing her head on his shoulder.

The length of torsos should determine the reclining angle that permits her head to rest comfortably. Her legs are then separated and extended across those of her husband.

This position provides a degree of warm security for the woman (“back-protected” phenomenon) and allows freedom of access for the man to encourage creative exploration of his wife’s entire body in the sensate-focus concept.

The level of physical communication in the manipulative sessions is encouraged further by direction for the female partner to place her hand in a lightly riding position on that of her husband.

By using a slight increase in pressure or gentle directional movement, the “where and how” of her need of the moment may be immediately communicated to her receptive husband. This and other forms of nonverbal communication allow sharing of her particular desires as they occur as manifestations of her sexual value system, and constitute a secure way by which her marital partner can identify and fulfill these desires by meaningful interaction.

This means of direct physical communication also provides the woman with the freedom to request specifics of genital play without the distraction of forced verbal requests or a detailed explanation.

Any spontaneous form of expression of a man’s own sexual tensions is one of the most interactive contributions that he can make to his wife. It is a viable component of sexual “give to get” in any circumstance of physical sharing.

This principle applies equally to the marital unit carrying out the simplest sensate-focus exercise in the therapy program as it does to a marital unit that has never known sexual dysfunction.

The man must not presume his wife’s desire for a particular stimulative approach, nor must he introduce his own choice of stimuli. The husband’s assumption of expertise has no place in the initial learning phase of a marital unit seeking to reverse the life’s nonorgasmic condition.

The trial-and-error hazard this poses is not worth the small possibility of accidental pleasure that might be achieved. In truth, error in some facet of this controlled manipulative form of physical communication has already been established, or the marital-unit members probably would not consider themselves in need of professional support.

Only after both marital partners have established the fact of the wife’s sexual effectiveness with controlled genital play and have developed dependable physical signal systems should trial-and-error stimulative techniques be crone a naturally occurring dimension of pleasure.

It is well to mention that even those partners with an established, effective sexual relationship may find it both appropriate and advisable to check out their physical signal systems by verbal communication from time to time.

An additional value derived from the non-demand position and its accompanying sensate exercises is its contribution to the removal of the potential spectator’s role.

This role can become as much a pitfall for the nonorgasmic woman as it is for the impotent male. Already considered in descriptions of female-oriented patterns of sexual dissimulation, the spectator role is dissipated when the sexual involvement of husband and wife becomes mutually encompassing for both partners.

For the husband is an integral part of the genital-play episodes. The co-therapists must be certain that the basics of effective pelvic play are clearly enunciated if the male partner is to provide an effective measure of stimulative return for the woman involved.

The husband is instructed both to allow and to encourage his wife to indicate specific preferences in the stimulative approach either by the light touch of her hand on his or by moving slightly toward the desired approach or away from excessive pressure.

Probably the greatest error that any man makes approaching a woman sexually is that of a direct attack upon the clitoral glans unless this is the stated wish of his particular partner. The glans of the clitoris has the same embryonic developmental background as that of the penis but usually is much more sensitive to touch.

As female sex tensions elevate, sensations of irritation, or even pain, may result from direct clitoral manipulation.

This originates from the fact that the clitoris, as a receptor and a transmitter of sexual stimuli, can rapidly react to create an overwhelming degree of sensation. When such a high level of biophysical tension is reached before the psychosocial concomitant has been subjectively appreciated, the woman experiences too much sensation too soon and finds it difficult to accept.

In the interest of a pleasurable, evolving sexual responsivity, the clitoris should not be approached directly. Specifically, manipulation should be conducted in the general mons area, particularly along either side of the clitoral shaft.

It must be remembered that the inner aspects of the thighs and the labia also are erotically identified areas for most women. Pressure and direction of manual stimulation should be controlled initially by the female partner for two educative reasons.

It must also be borne in mind by the male partner that there is no lubricating material available to the clitoris. As female sex tension increases there will be a sufficient amount of lubrication at the vaginal outlet.

This should be maneuvered manually from the vagina to include the general area of the clitoris. Vaginal lubrication used in this manner will prevent the irritation of the clitoral area that always accompanies any significant degree of manipulation of a dry surface.

A further dimension of sexual excitation is derived from manipulation of the vaginal outlet when lubricating material is acquired for clitoral spread by superficial finger insertion. There is usually little value returned from the deep vaginal insertion of the fingers, particularly early in the stimulative process.

While some women have reported a mental translation of the ensuing intravaginal sensation to that of penile containment, few had any preference for the opportunity.